ten years with my blancpain villeret

So, ten years gone already. Where does the time go? Ten years is 20% of my life, but only 2% of this watch's life which I'm hoping will span 500 years. No one really knows how long a watch will last, but I like to think of it in the year 2500: curators whispering about the rare and beautiful Blancpain, wondering about all the people who once carried it. 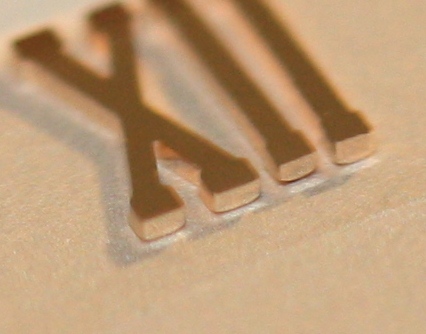 During the first 3 years I owned this watch, I had access to a very cheap digital camera. If you read my old reviews, you'll see the photos are of questionable quality and there are no useful closeups. But now I own a Canon digital SLR and I specifically got a 60mm macro lens and precision slide mount so I could capture watch parts and details. Finally, I can show some details I've only described in previous reviews. For example, here are the applied numerals making up the 12. Notice the variation in positioning leading to the glitter I've talked about before. 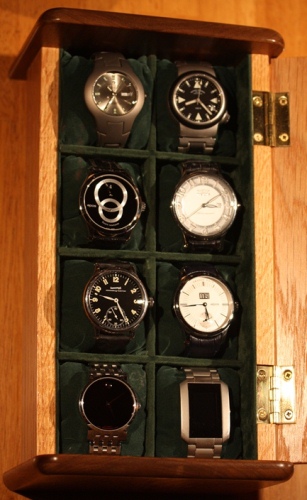 Although I intended to wear this watch every day for the rest of my life, it probably comes as no surprise this is no longer my only good watch. Nowadays, this watch is down to approximately 30 days wrist time in a year.

Several factors led me to purchase additional watches. First, watches are great. Why not have a few?

And once you have had a beautiful timepiece, one that gives faithful service with style and beauty, one begins to feel real pride of ownership. There are lots of watches on the market, most are unacceptable. But picking the right one, getting a good deal, and being rewarded with a wonderful object starts one thinking about trying it again. It seems only natural to chase that dream and purchase other watches.

During the Villeret's 4th year, I obtained an IWC Portuguese Chronograph. I owned the IWC for three years. Eventually, it turned out to be too similar to the Villeret: both have applied gold numerals over a glossy opaline white dial; 40 mm width with narrow bezel and wide, domed crystal; long leaf hands in gold; leather strap (with deployant); classic, timeless design; and no date or lume. When I could no longer justify owning both, one had to go. Perhaps no surprise, the IWC lost that battle. Though I asked more than I paid, the IWC sold in 3 days.

By year 4, this watch was no longer my daily wearer. I fell into a pattern of watch rotation that I still use as my small collection has grown. I wear just one watch for between a week and a month, then put it away and pick up the next. The Villeret would stay in the box for a few weeks or--as my small collection grew--a few months.

One night in 2008, I took it out of its box and put it "on deck" for wearing the following day. This means putting it into my winder and pouring on the turns. The springs in this watch can sop up a huge 2500 turns so of course I didn't expect to wind it fully in 8 hours. (Does your winder have a setting for 7500 TPD?) In the past, the winder was able in 8 hours to at least get it up to running where it could finish on the wrist.

But the next morning, the displayed time had not changed. I left it on the winder another day and still no movement. I finally wound it by hand, got it running and on my wrist. It was fine that day, but stopped that night. (I use the winder only for watches on deck.) I wore it for the week but it stopped sporactically.

The next time it came out on deck, a few months later, I couldn't get it to move at all. I could wind it tight (or as tight as an auto can go) and... nothing. A long comedown for a watch that once kept +0 seconds for 70 days. I joked that the watch was now running -86,280 s/day!

This watch, built circa 2001 and never serviced, stopped in 2008. Time for a well-deserved service. I saved up for a few months, then in 2009 Manuel Yazijian, CMW21, came to the rescue. Here's my beloved Number 61 up on the lift: 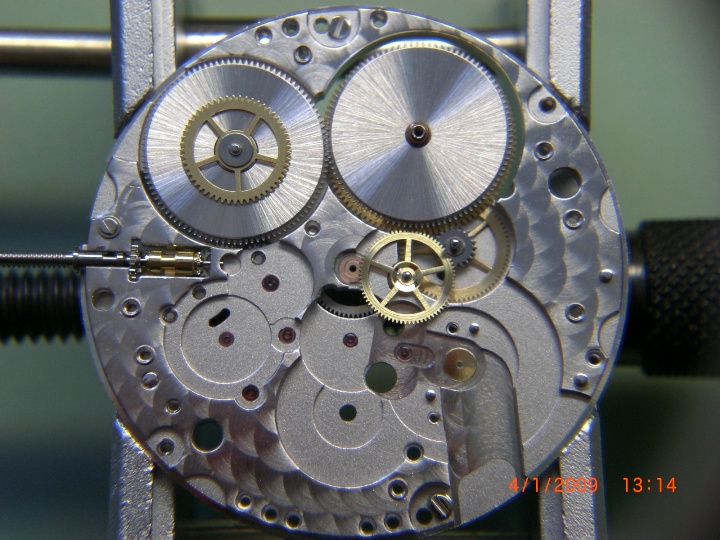 Manuel accomodated my special requests and got the watch back into tip-top shape. Before snapping together the 3-piece case (just like an old-fashioned pocketwatch), he rotated the bezel and crystal 180 degrees. This was a genius move because the 'outer edge' of the watch, the arc from 12 to 6 takes more damage than the 'inside edge,' the arc from 6 to 12. By spinning the bezel, he allowed the exposure to be distributed across the entire surface. Smart. 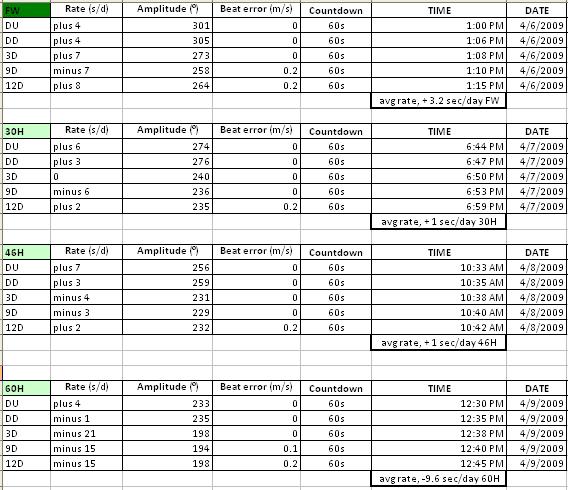 In 2013, it keeps a beautiful time. Good enough (plus a few s/day on the wrist) that careful checking hasn't been required.

The hour ring is circularly grained, as can be seen in this picture: 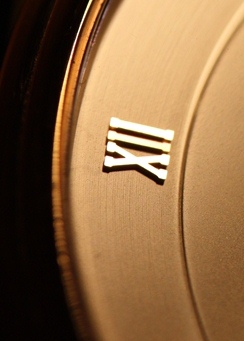 This causes the ring to act as a diffraction grating which breaks the reflection into a rainbow. Under just the right light, the chapter ring reflects blue, green, yellow, red. I tried again to take a photo of this subtle effect, but even after years of trying, I've never captured it. The following pictures are the closest I've come. If nothing else, they show the effect is real, but documenting the color on the dial itself remains elusive. Note the rainbows here caused by the ridges on the dial: 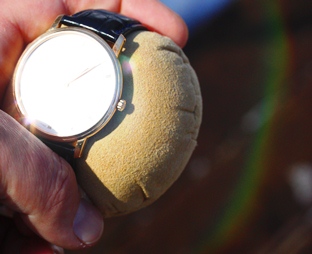 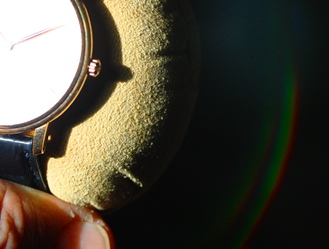 The lugs are too short for perfect functioning. I think Blancpain used a lug design from a classic vintage dress watch (probably 30 mm) where the horns were 16mm apart. Then they moved these lugs to a more modern 22mm width, perfect for this 40mm design. But some elementary geometry shows how this moves the springbar closer to the case.

Even with curved springbars and a custom strap with curved ends, the strap is held tight to the case. Add some movement and the result is inevitable. Notice the gold scraped off the case onto the strap:

However, the design of the case is hard to argue with. The sheer perfection of the proportions makes me loathe to suggest longer lugs. I'd rather live with a perfect shape and have to buy an extra strap during my lifetime than have an awkward-looking object that preserves the leather.

I have tried for years to take a picture of "The Dial Snake." This feature comprises 2 closely spaced scratches on the dial. This defect was delievered from the factory. One of Blancpain's own watchmakers did this: 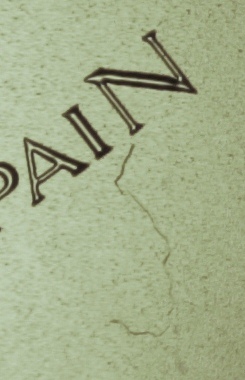 I noticed this mistake under the loupe within a few hours of owning this watch, years before the watch had ever been opened (it has been opened twice in its life). It didn't, and still doesn't, bother me. It is generally invisible, but under just the right light, I can catch a glimpse of it, looking like a hair on the dial: 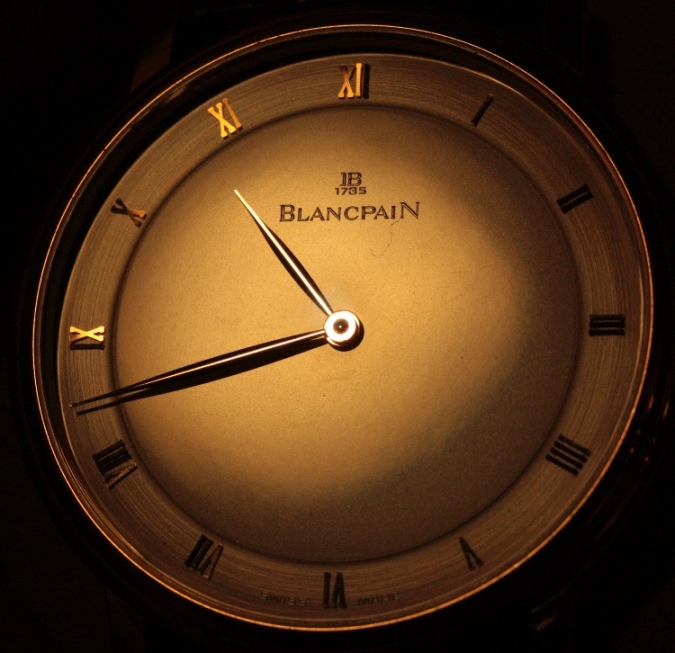 I noticed the nicks on the flanges of the hands on initial inspection. Again, this doesn't really bother me. Here's a photo where you can see the slight nicks at 5:00 (the 'spots' are on the crystal, not the hands): 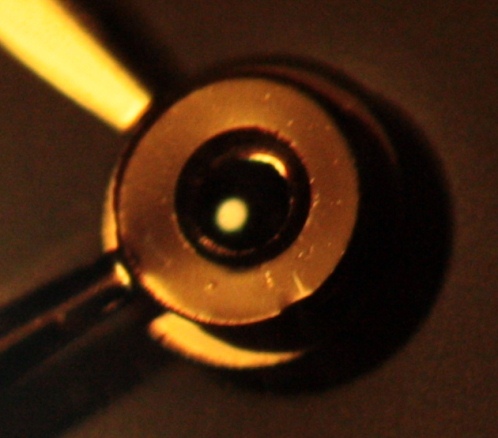 These gold hands with wide, soft flanges were pulled in 2009, but there was no further damage. No surprise since the man who pulled the hands was my instructor for an AWCI class in hand pulling. He has a lifetime of tricks for the perfect pull.

The outer surfaces of this watch are soft. The crystal has an anti-glare coating (inside and out) which makes the dial really pop. But that coating is soft and can be scratched. This is what 1,000 days of wrist time does to anti-reflective coating on a domed crystal: 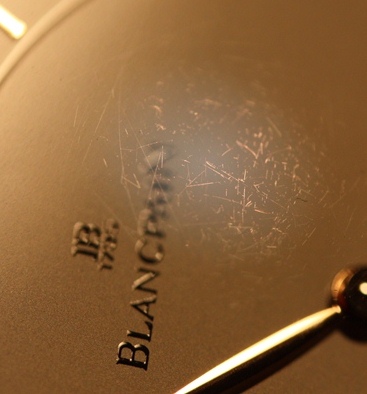 Even with this density of scratches, the coating is still quite effective and is still improving rather than degrading the watch's look. It will be many years before a polish (to remove the coating) will be in order.

Here's a picture that shows how the AR coating works to make the crystal invisible. Crystal? What crystal? 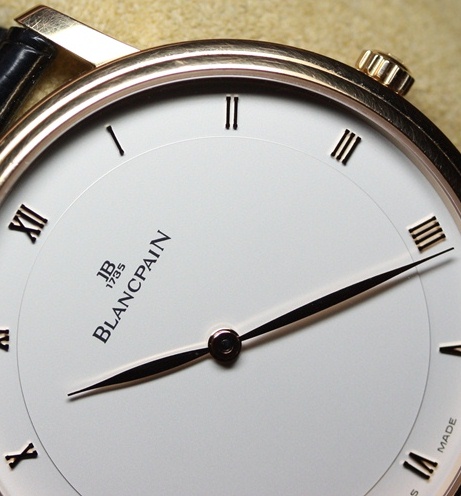 The rest of the case, made from high-karat rose gold, is also quite soft. How is the soft 18k gold holding up?

Now that the watch is in rotation rather than an every day watch, damage is rarer. The biggest instances of case damage are still the dings described in my earlier reviews. But now my macro photography capability allows me to document the case more thoroughly.

This is the most significant damage that has occurred to this watch. It happened in the second year (probably around 300 wrist-days). The ding is on the sharp edge of the bezel where it overhangs the case. On this watch with its 3-piece, snap-together case, the bezel is a different piece than the case itself. The bezel has a slightly larger diameter than the case (to make the watch appear thinner) so the bezel edge is very vulnerable. And 2:00 is always a dangerous location for watches on the wrist. Since the watch's service in 2009, this is now the 8:00 ding. Here it is in all its glory: 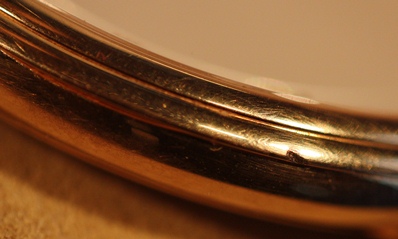 Notice the edges of the ding are becoming rounded and dull as the ding ages and wears. The source of this ding has been lost (see the 2 year review). 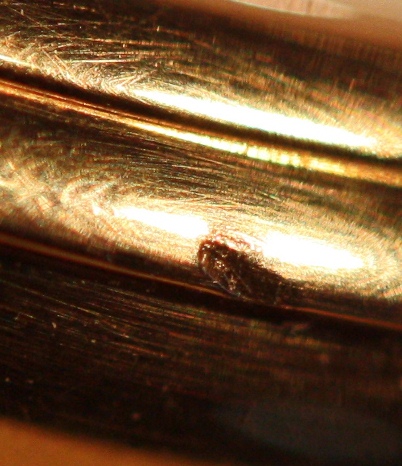 In the year 2 review, I told the story of how our new puppy put a dent in the bezel between the 11 and 12. (Since the '09 service this dent is now between the 5 and 6.) Here is Honey today alongside the golden memorial to her youth: 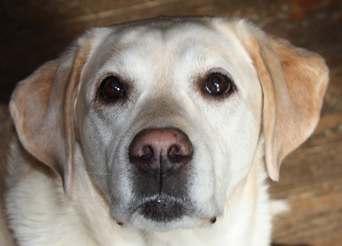 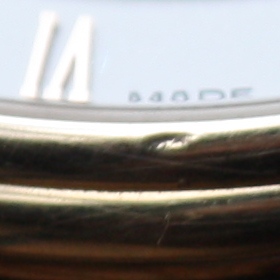 She forgot about the incident 2 seconds after it happened, but the gold has held a grudge for more than 8 years. That's one reason dogs are better than watches.

The other scratches, scrapes or dents described in earlier reviews have been lost into the background of general patina that is building on the case.

The entire case has begun to show a nice patina where the gold softly glows in the light rather than throwing sharp reflections. With some harsh lighting, the scratches that comprise the patina become evident: 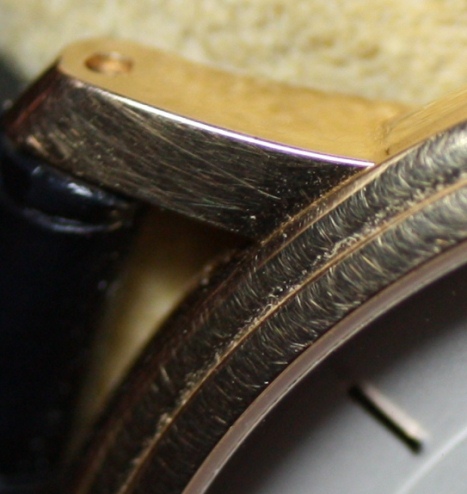 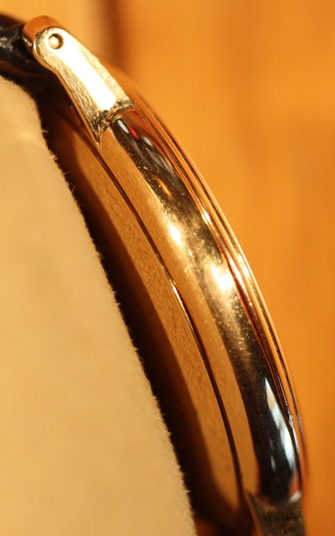 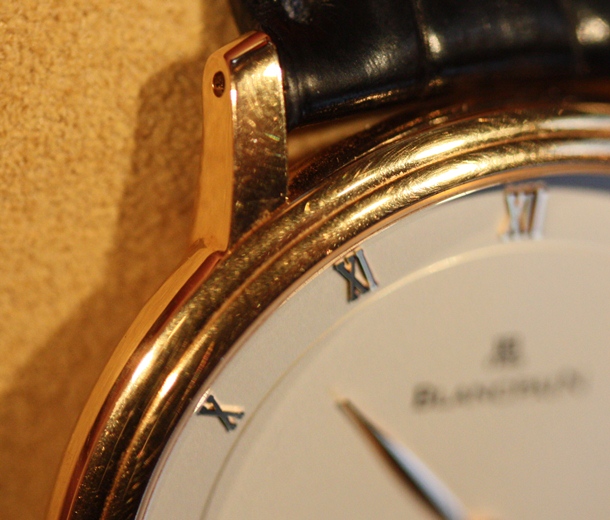 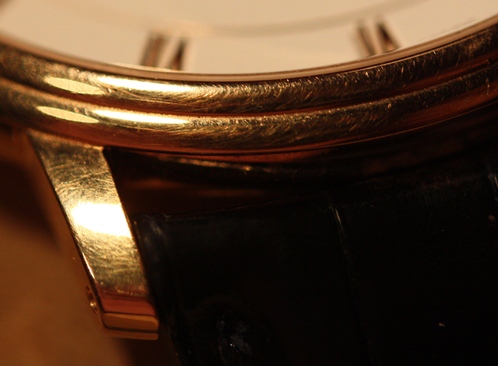 The beautiful burlwood box went into storage at the 4 year mark, when I moved my watches into my 8-slot box (pictured above). The famous Joel Bouchet box can still wow 'em: 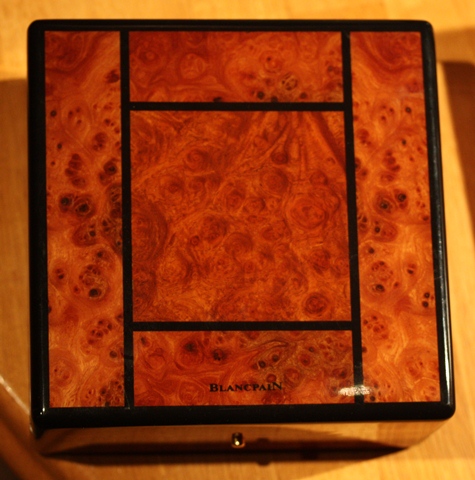 At the 10 year mark, the brass is still gleaming. And here's a detail to delight an obsessive, notice the screw heads are aligned: 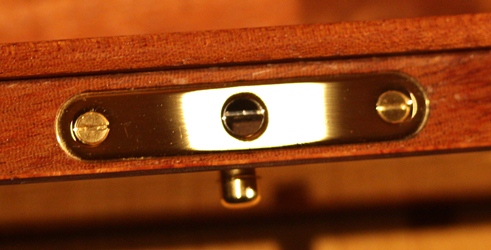 After ten years of close examination I still believe this is the world's most beautiful watch. 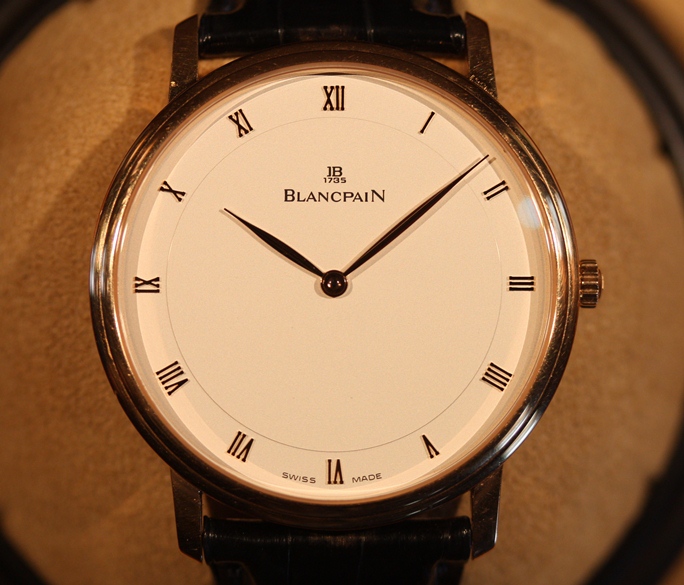