Here in New England, snow, salt, rain, mud and other environmental detritus gets tracked into buildings. To cut down on the maintenance this would engender, many public buildings here have an air-locked entrance (2 sets of doors) and commonly, the floor of this airlock is made of metal grating.

This is a good idea as the melting snow and dirt do not leave potentially dangerous messes on the floor, but are removed while the grating provides sure footing.

But as common as this system is, all grates I've seen in this role have a serious defect: They have repeated patterns.

Why this is a problem requires some information about the human visual system. How do you know how far away something is? Well, there's all kinds of clues (examples: Does it look big or small? Does it move fast or slow when you move your head?). But often we rely on something called ocularmotor triangulation. That is, you have to move your eyes in toward each other to focus on something close and the strain on the muscles lessens as the stuff is farther away. For distances of less than 10 feet or so, this system is very finely tuned and you can tell the difference between something 5 feet away and 5 feet 6 inches away quite easily (try it yourself).

The problem is that when your eyes try out a distance (try to focus) they keep adjusting the angles until both eyes have locked onto the same object and can bring it into focus. This system can be tricked if what you are focusing on has repeating patterns. Hold a window screen at 18" from your face. See the problem? You can focus on the wires at many different angles because it is not easy to distinguish one wire from another. Your right eye may be looking at wire x and your left may be looking at wire x+1. You think you have resoved it, and it becomes perfectly clear but you have been fooled into setting your eyes at the wrong angle and thus the screen looks further away than it really is. Of course, your left eye may see wire x-1 and then the screen looks closer than it really is. In fact, it may be impossible to tell, just looking at the screen, which is the right distance. 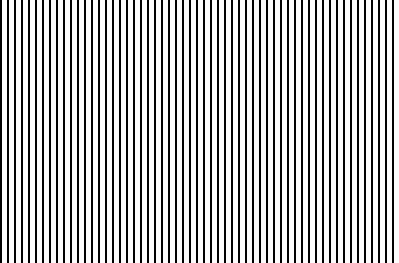 Hence the difficulty of modern gratings. If you look down to "watch your step," your visual field is filled with a repeating pattern which can be misinterpretted. The floor can look higher or lower than it actually is. The difference in the heights depend on the size of the repeated pattern and how many full patterns you are "off." When you place your foot and the floor is not where you expect it to be, falls are the result. Think of climbing stairs and thinking there is one more but there's not: when the floor isn't where you expected it, balance is lost.

How to make grating safer

This can be accomplished by simply applying some non-repeating pattern onto the surface of the grating. Paint a single "X" in the center of the floor to provide a non-ambiguous focal point and "off-by-one" errors are impossible. This assumes the non-repeated pattern is visible in every possible visual field. Painting randomly positioned (but sufficiently densely) differently colored and sized (so there are no repeats) polka-dots would also be effective.

These are stopgap solutions however and have practical problems: Gratings are low-maintenance metal and painted flooring would have relatively low durability. This is also true of any applied fixes such as tape. 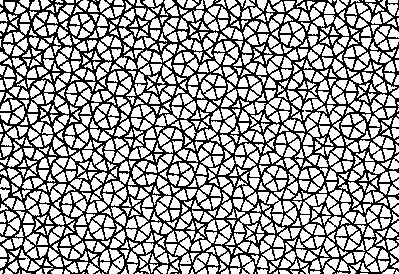 Better is to make the grating non-repeating to begin with. And to help even those who get turned around on the grating (who may travel north for a few steps, then turn east), there should be no repetition along any axis. This is solved with the simple expedient of making the solid parts of the grating from Penrose Tiles. These are simple shapes (some of his tile sets have just 2 shapes) that tile the plane aperiodically. No matter how you put them together, the plane thus covered cannot be folded and have the lines match up. That means your eyes cannot be tricked into thinking the pattern A seen from the right eye is the pattern B seen from the left eye. The only focus possible is when both eyes are looking at the same tile. This means the power of our ocularmotor distance judgement system can be brought to bear without ambiguity. The floor is where we think it is. And thus the floor is much safer.